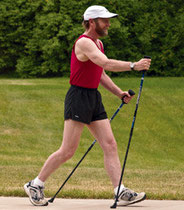 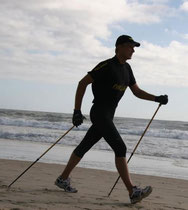 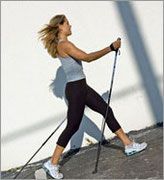 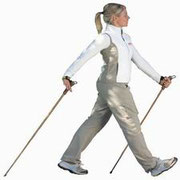 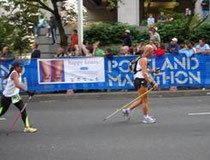 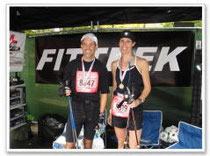 The average person might not even notice the difference. There are various ways to learn Nordic walking, depending on the instructor."

"...The women say the specially designed Fittrek poles they use while walking for exercise help them keep mobile and active.

Nordic walking evolved from land-based training techniques used by Nordic skiers. Poles strapped on to the walker's wrists turn the motion into a total body workout.

Okasaki-Maynard learned about the poles from her late husband's best friend, personal trainer and massage therapist Eric Okamura of Fit For Life.

Nordic walking brought land-based exercise back into her life, Okasaki-Maynard said. (She also does water exercise daily in a pool.)

The Fittrek poles she uses are secured with a velcro strap that goes around her wrists. The curved tip on the bottom of each pole has a tread on it that helps with balance..."

" It's no secret that the best way to get in shape and stay in shape is to train as many muscles as possible. That's why cross-country skiers are known to be the most aerobically fit athletes in the world.

But if you want to leave your skis and boots behind, Early Show Fitness Contributor Minna Lessig found another activity that has the same excellent benefits from the creator of Fitness Trekking, Dan Barrett.

A lot of gear is involved. The poles at first glance look like ski poles, but there are some special features that separate them, Barrett says. "These have springs in them. So especially when you're on asphalt or concrete, it minimizes the impact."

There is also a bet with clips that connect to the poles to increase intensity. Just by walking the legs get a great workout and by using the poles back muscles and triceps are engaged as well, he says.

"Total body, especially the big laterals, which are the largest muscles in the upper body. So if you have the lats working with the legs moving, then you're really getting a workout," Barrett says.

To get maximum benefits, he recommends working out 6 to 7 days a week, since it is gentle for the body. "We recommend the more the better. And especially if you're building a base of endurance."

Barrett offers his Fit Trek class at CRUNCH!, in New York City and he says each month he focuses on a different part of the body.

And nothing beats group motivation

"I think there's almost like a team spirit that occurs. It's very motivating. Some days, you may not feel like pushing yourself. But the group's out there, moving quickly, and you get energy from that," he says."

"Trekking Classes Workout classes are embarrassing enough, but being spotted lunging, leaping, and pole-striding your way through city parks—well, how do you explain that to your friends? Just tell them you've joined a Fittrek class, currently offered in such aromatherapied locales as Miami, Aspen, and Tucson (but likely coming soon to a workingman's gym near you).

Fittrek (305-534-6016; www.fittrek.com), founded by adventure racer Dan Barrett, redeems its mall-walking-retiree chic by transplanting the cardio benefits of a good elliptical trainer outside; think of it as sport-specific training for next summer's trek to Aconcagua base camp.

Classes take you through warm-up, then aerobically intense power trekking on flat terrain, speed drills, hill climbing, plyometrics, lunges, squats, and push-ups. You can also up the ante with a weighted pack and gloves. Too soft for serious athletes? Hardly. Even seasoned jocks get a whuppin'.

"It basically spanks them," says Barrett. "Some of these Spinning instructors were huffing and puffing, saying, 'Wait up!'" That is, when they weren't hiding from their friends. "